Cajun Feast
New Orleans jazz welcomed PGC members to the Cajun feast organized at Pune’s Soul restaurant on a not-so-rainy Sunday afternoon. The head count was 28 and almost every one attending had a cooking task that ranged from rustling up an unlikely okra salad to the piece de resistance – Mississippi Mud Pie - though no one showed any resistance to that even after a hearty meal! 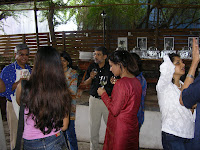 This was the first ever sit-down meal organized by the PGC and tables were arranged in a horseshoe shape around what would undoubtedly be the focus of most attention – twin burners where the Blackened Fish and Chicken were seared in a dazzling display of light and sound! “Ah, a suitably flamboyant touch,” approved a guest, in a mellow mood after the wine and appetizers he’d tucked into with enthusiasm.
Miazma Chenin Blanc 2005 was the 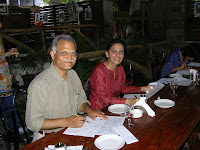 first to be uncorked, served with Anu’s Okra Salad, and for those of us who associate bhindi with lashings of masala and oil, this was an eye-opener! Shanth’s version of Shrimp Remoulade had immodestly large shrimps in a mustard infused sauce sitting on a bed of lettuce, and won instant approval from many who had turned up their noses at the okra! Rohan and Mrunmayee, and Vinita then produced their Maque Choux, creamy corn in colourful bowls of red and green pepper.

By the time the main course rolled 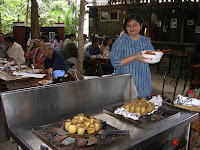 around, members already had a sated expression but no one declined the Cajun Potatoes, painstakingly prepared by Shubha, Shalini and Jyoti. Miazma Sauvignon Blanc 2005 was the wine of choice and noticeably drier than the Chenin Blanc, was a crisp accompaniment to the more robust flavours coming up.
Spoiled for choice with three types of Jambalaya on offer (Sheela’s Shrimp & Sausage Jambalaya and Vegetarian Jambalaya and Ashvina’s Chicken & Sausage Jambalaya), several enthusiastic

members tried all! Amazingly, groaning though our gourmets were by this time, the Blackened fillets – skinned & deboned to perfection by Rita - of Black Pomfret had them all perking up, not least for the drama surrounding its making! Master chef Shankar was ably assisted by Rita, Vibha, Shanth and Mrunmayee, and they dealt out the chicken and aubergine versions with considerable élan as well.
Vibha brought custom made laminated menu cards reflecting the Cajun theme and Deepak printed out the tasting note forms.

“At last, my dream of what a Gourmet Club meet should be like seems to have materialised,” beamed Shankar as he watched his flock enjoying the experience of sitting back and being served wine and a truly incredible Cajun meal in style.

Gauri added a bonus to her Mud Pie – sugar free, fat free Cappucino gelato – and if anyone needed to lighten up by then, it was those 28 who’d just made their own trip into the kitchens of Louisiana!
A big thanks to Sean Davidson of Soul for his generous hospitality, manger Girish and servers Naidu and Prabhakar for their wholehearted cooperation and assistance in making the afternoon a very memorable one. 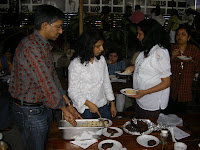 Arre Shankar, seems to me that your gourmet club will need to offer discounted gym memberships as well :) I remember the blackened fish you and Bapi had at Stamford, August 2001....they didn't have any aubergine versions for me though :) Continue having fun, good luck! Suja.

the meet was just purfect.Only thing missing was a real Jazz band!!

the meet was just purfect.Only thing missing was a real Jazz band!!

Suja, you should try the Aubergine one at home. It's really good tho it'll activate the smoke alarm and the neighbours!

Hi Shankar:
It was good to see that you guys are enjoying the cuisine of New Orleans in Pune and having a blast at it. New Orleans itself is a shadow now of its former self. When you go to New Orleans now, you almost feel guilty to have a good time because of what has happened to the City. It is still in many ways a ghost town that reminds you and puts you in place in the realm of the universe.
You celebrate as India turns 60 - the poor boy of 60 years ago is still a poor man now in many ways- the dichotomy that is India.These are just a few musings of mine. I am not throwing cold water on the fun -just a reality check as i was pondering over your blog. Continue to have fun because your are fun. Bye for now -Raghu