Ashvina Vakil
The French believe in leisurely meals, spending many long hours at the table relishing their food and wine. PGC heartily approves of such an attitude, as the 4th anniversary celebrations at Bohemian confirmed. Our French feast lasted four hours and we did full justice to the both the food and wine!

French cuisine deserves to be eaten in style – that means, no jostling around at buffet tables! Instead, we artfully arranged ourselves at the tables, some proving to be more artful than the rest – they chose the table closest to the kitchen! As one seated at the table farthest from the kitchen I have taken due note of this strategy for future implementation! 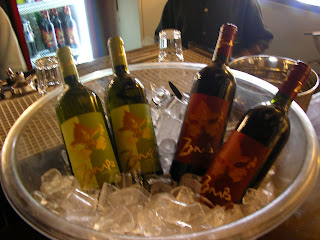 Zampa wine was flowing generously, courtesy of Vallee de Vin, and though appropriate pairing with the food had been planned, members decided to just go with the flow instead! Quite likely only a few drank the right wine with the right food, but no one was complaining. Aptly however, we began with Zampa Soiree Brut, the sparkling wine providing a nice celebratory touch. The Vichyssoise, a potato and leek cold soup made by Shubha Nafrey, Harshal and Sushma, and served in little glasses had some of us quite confused till we realised it wasn’t buttermilk we were being offered! Delicately flavoured, it went down surprisingly well with the sparkling wine.

Most of the cooking tasks had been entrusted to PGC members, and they rose to the occas 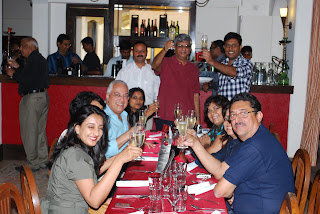 ion with suitable élan, remaining unfazed by the unpronounceable names. Impromptu French lessons were being conducted at some tables, especially when the crudités came around. “But it’s all raw,” exclaimed a member chomping down on a broccoli floret. “Exactly,” was the smug response from one of his table companions. “Crudites are raw vegetables!” He remained unimpressed by this French absurdity, only perking up when the cooked hors d'oeuvres arrived. 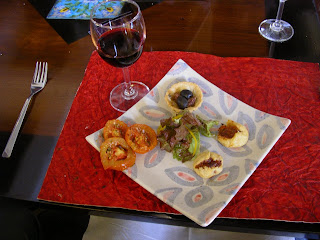 And what an attractive offering that was: Pisaladiere, mini pastry bases with an anchovy topping; Red Pepper Gougeres, little cheese puffs with a red pepper stuffing; garlic and herb infused Tomatoes Provencale; and the hugely lauded Spinach Potato and Goat’s Cheese Tart made by Sonali, Muriel and Pradnya.

“Look out for the yellow zucchini in the Ratatouille,” instructed Meghna when it was time for the Main Course to be served. “That will be the Ratatouille I cooked!” With three other members also responsible for the Ratatouille (eggplant casserole with tomatoes, onions, peppers and zucchini), it was a little difficult to tell them apart, but Shanth, Shubha Gadkari and Vikas had all added their own special touches we hear! Shankar, Cyrus, Vidya and Sajjani made the Coq au Vin, each one cooking the quintessentially French chicken and mushroom dish in a different type of red wine! Though traditionally cooked in wine from Burgundy, the PGC version was enthusiastically mopped up with the bread, in true French style. 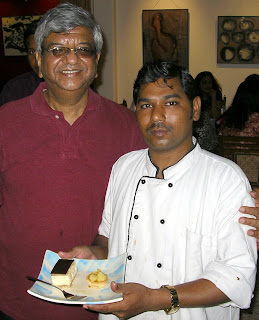 As always dessert was the piece de resistance, and Ram Singh, Bohemian’s pastry chef, did a superlative job of replicating the Caramel Parfait Glace with Salted Peanut Caramel and Milk Chocolate Mousse. “You will not find this in any restaurant in India,” assured Shankar, who sourced the recipe from Masterchef Australia’s Celebrity Chef Challenge. “This is the signature dish of Philippa Sibley, Executive Chef of Melbourne’s Il Fornaio.” The Apple Tarte Tatin was not quite as authentic as Shankar would have liked however. “They forgot to caramelise the apples,” he rued. 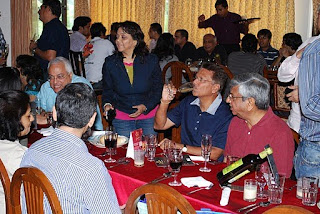 Zampa’s Sauvignon Blanc, Cabernet Syrah and Syrah proved to be fitting accompaniments to the meal; a lot of wine was imbibed during the unhurried course of the meal. Thank you Ravi Jain of Vallee de Vin for taking the time to come down from Mumbai to join our celebrations, and for your invitation to visit the vineyards in Nashik – that’s something our wine enthusiasts will be happy to take you up on! Especially KS Duggal, who a little bird tells us, knows you from way back in time when you partied together as bachelors!

Bohemian’s Chef Dinesh Pawar and his team filled in the gaps in the menu admirably, creating many of the hors d’oeuvres even though they had a huge party order to tackle for the same evening. Thank you Ketaki and Shekhar Pimpalkhare for the use of your lovely restaurant! 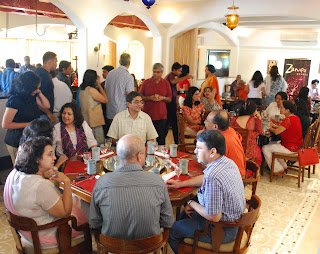 Hi!
It would be great to meet other people eating and drinking their way through life! Can anyone join or is it by invitation only?
Do let me know!