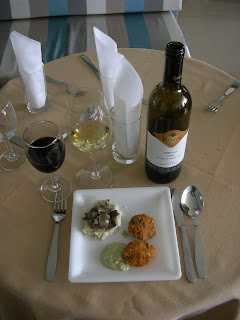 restaurant. How else would he figure out that Grillo is a white wine grape variety widely used in Sicilian wine making! That established, the rest of the 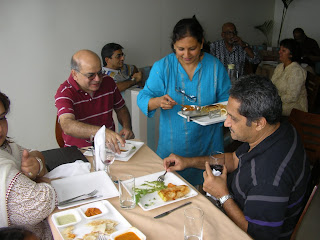 group settled down to glasses of Reveilo Grillo with its alleged ‘bouquet of citrus, lemon, orange and grapefruit’, and another meet was on its way.

Held at Nilima and Vivek Kalambi’s ‘Way Down South’ restaurant on Baner Road (a special thanks to them), PGC’s July meet featured an ambitious menu that proved perhaps to be too much of a challenge for Pravin, the chef roped in for the occasion. All the recipes chosen by Shankar were award-winning creations of Indian-born chefs living abroad, beginning with Upma Polenta, a concoction dreamed up by Chef Floyd Cardoz of the now closed Tabla restaurant, New York that recently won him an USD 100,000 prize on the Top Chef Masters show in the U.S. 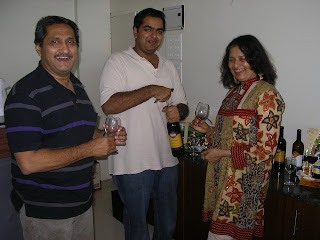 What we were served wasn’t quite Cardoz’s ‘Wild Mushroom Upma Polenta with Kokum and Coconut Milk’ – not only because the right kind of mushrooms weren’t available but also because leaving out the chicken stock (yes, chicken stock in upma!) took the dish back to mundane everyday levels. 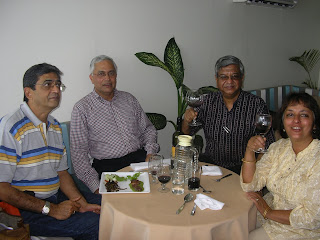 Fortunately you can’t go too wrong with salad and the Crispy Okra with Onions and Tomatoes (Suvir Saran of Devi restaurant, New York) went down well with bhindi fans.

Chicken Tikka Pies based on a recipe by Michelin Star winner Atul Kochhar of Benares restaurant in London followed and were judged ‘too biscuity’ by some, while others, probably not as discerning, gave it an enthusiastic thumbs up. 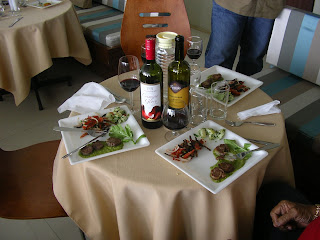 The Seared Lamb Medallions with Sesame Chutney (Chef Hari Nayak recipe) met with mixed reactions again, with the lamb termed succulent but the chutney being more or less deemed ‘too minty’. A South Indian touch was added with Rasam Wada and Mini Dosa Rolls with the complim 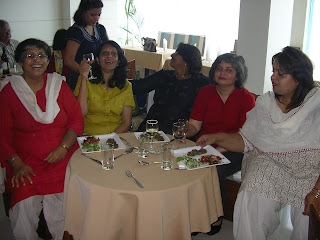 ents of Vivek and Nilima Kalambi.

Dessert was Apple Crumble with store bought Vanilla Ice Cream, and PGC members being the fussy lot they are, clamoured instead for Shankar’s home made vanilla bean ice cream!

Needless to say, a lot of wine was consumed as the lunch proceeded, and all the early nosiness about prove 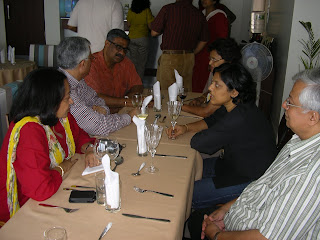 nance and varietal was forgotten as bottles of Reveilo’s Sangiovese, a Tuscan style red, were downed with much appreciation. Vallonne’s Crimson Glory, a blend of Malbec and Merlot, didn’t find as many takers.

All in all, this wasn’t one of our finest efforts, but it didn’t dampen the spirits of new members, one of whom offered to host a Bohri feast in a couple of months. That’s PGC for you – always ready for new culinary adventures!
Posted by Shankar at 10:36 AM