Anyone assigned a cooking task for a PGC meet faces the meal with some trepidation, lest the Grand Master (aka Sangria Shankar, a little birdie tells us) disapproves of one’s c 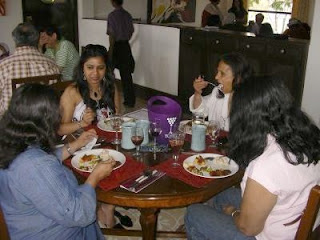 ulinary efforts. Of course, by the end of the meal, one has usually had enough wine to have forgotten all one’s initial fears and all is well till the inevitable post mortem! This time however, Shankar had a benign smile on his face throughout the Spanish feast, and the post mortem that followed was almost equally kind.

So, let’s raise a glass to that before we relive that wonderful meal. Salud!

Having said that, PGC 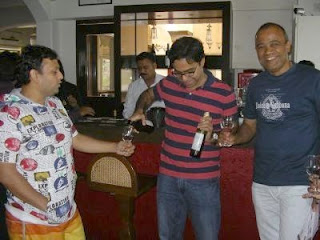 members didn’t really have much to do this time, except for soup, salad, and some tapas. Shekhar & Ketaki Pimpalkhare’s ‘Bohemian’ restaurant, and his team led by Chef Dinesh, took on the major tasks, leaving PGC members to enjoy their meal in a pleasant wine-induced haze. Ravi Gurnani of York Winery and his team are to be thanked for that happy circumstance; they ensured that the wine kept flowing.

The Chenin and Sauvignon Blanc were already being quaffed by 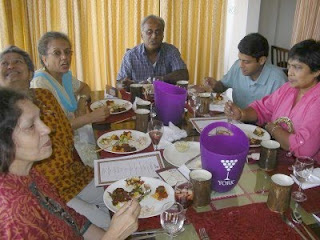 Salmorejo, a cold tomato and bread based soup from Cordoba followed (Ashvina Vakil, Rohit Arora, Pradnya Pradhan, and Ilena Ashish). Thanks to Rohit’s enterprise we were treated to a choice of garnishes, ranging from Serrano ham, to tuna, and hard boiled eggs, and they definitely adde 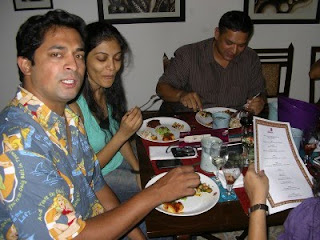 d bite to the soup. The lazier ones among us had only bothered to slip in some capsicum and onion with our soup contribution!

The Orange and Red Onion Salad (Namrata Agarwal, Dipti Desai, Vikas Kumar, and Vinita Mohoni) with its scattering of nuts, sunflower seeds and raisins was a great way to freshen the palate before we got to the serious business of the Valencia Style Seafood Paella. Replete with mussels, jumbo prawns and calamari rings, and boasting a suitably burnt bottom, the paella filled up eve 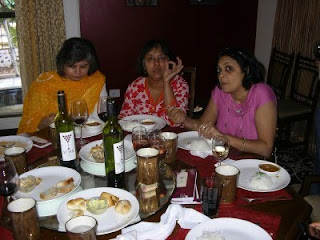 ry crevice in already full stomachs, which was unfortunate because there was still more on the menu to get through! With a little help from the Cabernet Sauvignon and Shiraz Reserves, we managed to appreciate the fragrant Caldereta de Cordero (Moorish influenced lamb stew), albeit in mini doses.

Special mention must be made of the assorted country style breads and flavoured butters created by Team Bohemian, which had everyone nibbling away between sips and courses. The sangria was eminently forgettable – obviously our Grand Master had neglected to lend his magic touch, distracted as he was by all the wonderful food!

As always, the crowning glory of any PGC meal is dessert and Shankar’s French Vanilla Ice Cream, made from vanilla beans sourced all the way from Kochi, was the perfect companion to Bohemian’s Zurracapote, dried apricots and prunes simmered in sweetened, spiced red wine. Some of us managed to sneak in second helpings, obviously reluctant to end a delightful meal that had already stretched to over three hours!

As they say in Spain, Olé! to a great experience! And many thanks to all who made it happen.

To view all pictures of the meet, click here