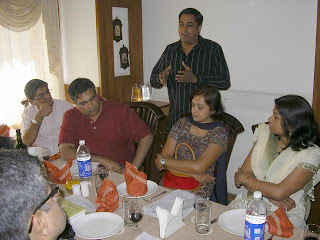 The Pune Gourmet Club convened after a long break, and we seemed to have lost faith in our ability to cook dishes with strange-sounding names! Despite Shankar’s initial apprehensions about handing over the task of creating a Kashmiri Wazwan to the Waza at the Northern Frontier restaurant, the meal was an almost unqualified success. (Like the gourmets we are in training to be, we give full marks only with some reluctance!)

The restaurant is quite modest in size and 46 of us were a tight squeeze, eliminating the opportunity to exclaim over the food and wine with anyone other than our table companions. The wines for the day were from Chateau d’Ori, the first offerings from their organic vineyard at Dindori. A Cabernet Merlot accompanied the first course of succulent Kabargah ta Tabaq Maz, and Kebab. The mutton ribs disappeared as fast as they arrived on the table, much to the amazement of the vegetarians who were still finding their way around their Paneer Tikka, and Nadru (lotus roots) chips. 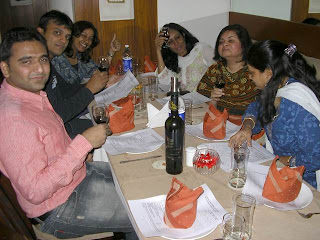 The Cabernet Syrah was served with the Rishta, meatballs in gravy, which was the only dish that didn’t find immediate favour. The meatballs tasted a bit undone and rubbery, and needed to be washed down by copious quantities of the wine! The plum coloured wine meanwhile left us with a purple hue around the lips and on the tongue, and while we didn’t think too highly of this after effect, Avik Duke of Chateau d’Ori assured us that it was only created by really premium wines! We take his word for it. 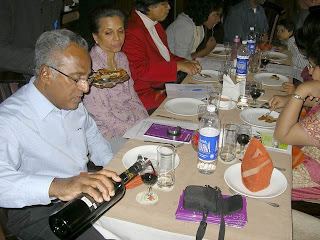 The subtly flavoured Nadru Yakhni was a treat, even for those who had never tasted lotus roots before. While the vegetarians ate Rajma Goagji, an interesting kidney beans and turnip preparation, the Dhaniwali Chicken Korma caused waves of enthusiastic appreciation. Redolent with saffron and livened up with a hint of pepper, it mixed with the saffron rice to complete perfection. The Sauvignon Blanc provided just the right accompaniment to the Korma, though the more robust flavours of the other food didn’t really suit the mild wine.

Dessert was Phirni served in clay pots, and some dexterous sleight of hand ensured that some got more than one helping!

“You can always measure success by the mood and the flow of conversation. I did not see a single grouchy face and the mood at every table was upbeat,” says Shankar of this first ever restaurant meet. We had a large contingent of guests this time, and one of them remarked that PGC has raised the bar for other clubs, which is certainly fine praise. A standing ovation was accorded to Waleed, Northern Frontier's Waza, and indeed he did a wonderful job. Perhaps it was a good idea for us not to have cooked after all! 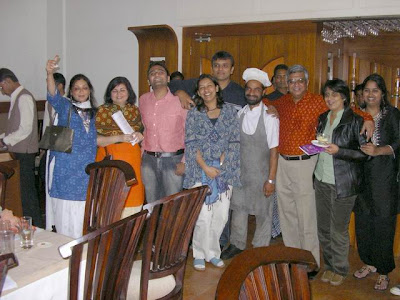 Some vegetarians. I counted two. However I must say that I was pleasantly surprised with the food. The nadru chips were a revelation and I would have them over a Lays snack anyday anytime. The Rajma Goagji was much on the spicier side though palatable. Highlight of the lunch affair would be the Cabernet Merlot. It is a breathtaking wine that I am going to buy at the next available oppurtunity. A heartfelt thanks Shankar for all the hard work you and your sidekicks put in to get this club rocking!!

Vegetarians were three. I personally did not try either the paneer tikka with saunf or the rajma. Jyoti did say that the paneer seemed a bit dry. I heard that the rajma shalgam (turnip/ goagji)was rather tasty. The spiciness must have gone down well with the Cab Merlot which was fruity but not too much. Unfortunately Kashmiri cuisine does not offer a wide choice in vegetarian starters. Both the nadru yakhni and chips were very good.

Me and my husband Sameer really enjoyed the whole event. Thanks to Nilesh for letting us know about it and thanks to Shankar and the whole team for such an innovative event and fantastic organization.
Regarding the wine selection i would like to make one comment about Cabernet Merlot.. i personally did not enjoy this wine as somehow it did not go well with the Veggie starters and overall the taste and aroma was not so pleasent. Well I was one of the veggie lovers.