Seven corks popped almost simultaneously and the first anniversary meet of the PGC was underway! As befits a gourmet club we have to admit to opening bottles of sparkling wine to celebrate the occasion, but while it wasn’t genuine champagne, the Vinsura Brut 2007 rose admirably to the task.

“Watch the bubbles rise,” advised Shankar and while we exclaimed over their perpendicular path, volunteers put together the first lot of starters. Unpronounceable names and uncommon ingredients are usually enough to lend a meal a gourmet touch, but that Sunday meal was certainly more than that. Weeks of behind the scenes activity had segued into what promised to be an unforgettable meet. Raw material came from as far as Singapore, and adding valuable support to the commendable efforts of our own members were the Sawhneys of Silk Route and their enthusiastic staff.

South East Asian was the theme and a record 70 people turned up to indulge in delicacies that ranged from Japanese and Korean to Thai, Balinese and Vietnamese. Rita Sawhney and Sangita Jagtap put together attractive platters of Miang Khum (betel leaves stuffed with dried shrimp, nuts and herbs). Regular paan eaters looked decidedly uncomfortable faced with the task of spreading shrimp paste on their paan, but most enjoyed the unusual concoction! Shubha Nafrey provided interesting little munchies as an aside, and dried squid and wasabi coated nuts added to the mélange of flavours already bursting on our tongues. 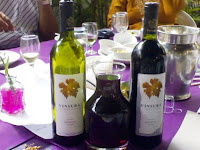 Each table had a designated wine bottle-in-charge, who was equipped with a corkscrew and the task of ensuring that everyone had the right wine at the right stage of the meal! Vinsura Chenin Blanc 2007 accompanied the first round of starters, which also included Shitake Nikozume (mushroom caps stuffed with ginger flavoured ground chicken) put together by Mrunmayee, Harshada and Rohan; and Vegetarian Stuffed Mushrooms (mushroom caps stuffed with ginger flavoured minced tofu) made by Sheel Rege. Parag Agarwal’s Kimchee (cabbage pickle) provided a pleasantly tart accompaniment to the mushrooms.

The piece de resistance of this part of the meal was undoubtedly the sushi. Created by the chefs at Silk Route, the platters were a visual delight and the salmon, prawn, and veggie sushi went down extremely well. There were some watering eyes and smoking ears from those who’d been too adventurous with the wasabi, but even they reached for seconds.

Platter number two, served with Vinsura Rose 2007, took us to Bali and Vietnam. Shalini Kagal was dispatched to the grill to watch over the Be Pasih Mepanggang (whole surmai marinated in Balinese style spices and charcoal grilled) and when the fish came to the table it rendered most of us speechless with its exquisite texture.


One bright spark likened it to a Balinese patra ni macchi but luckily there were no Parsis around to take offence. The Gai Cuon kept us all busy; stuffing the fresh cold rice paper rolls with crispy sliced roast duck or vegetables, was a delicate task. We’d left preparations for this to the experts and Silk Route did us proud. The duck was cooked to perfection and nestling in a bed of thinly grated cabbage and carrots and flavoured with Hoisin sauce, the Gai Cuon was another highlight of a meal that was growing more exotic with every course.

The Vinsura Zinfandel 2007, to be served with the main course, had been decanted in advance to allow it to breathe. Shubha Gadkari and Mabel Patwardhan had the task of marinating lamb slices in spices for the Korean Bulgogi; Shankar provided the vegetarian alternative of aubergines, both of which were destined for the grill. Accompanying the Bulgogi was Sigumchi Namul (seasoned spinach) made by Sandhya Potdar, Dipti Desai and Sharon Fernandes. Indonesian Chicken Curry (boneless chicken marinated in spices, coconut milk and slow cooked) accompanied by steamed rice came from Jaya Kibe’s kitchen, while Bok Choy a la Shanth (vegetarian offering) accompanied by steamed rice was Shanth Mannige’s contribution.

Single-mindedly eating our way through this amazing medley of flavours and textures, we arrived at the dessert stage, not sure whether we had the courage to eat one more bite! The novelty of Gauri Nafrey’s Kao Neow Dam (black and white rice pudding served with mango) had most of us succumbing to it however while Rita Sawhney’s Coconut Jelly provided the final delicate touch.

It was not all about eating and drinking and exclaiming appreciatively as every course was served. Each member also rated the wines according to appearance, taste and overall finish. We had guests from Vinsura, including the managing director Kishore Holkar, and master winemaker M.P. Sharma who fielded some questions on the winemaking process. Members made some impromptu speeches, applauding the club and the indefatigable Shankar, who looked the picture of satisfaction in his sommelier’s apron.

A truly memorable end to the past year’s incredible gastronomic journey, and one that will stir us to greater culinary exploits!

good write up ashvina! it felt as if i went thru the day again with sweet gastrnomic memories!

You are a real foodie, aren't you?
You go, girl.

Hi,
This article about vinsura wines and indian wine is very interesting.
If you want to discover others great informations about vinsura wines and indians wines, you can
fell free to visit the following website Indians-Wines.com
I will take time now to read others post on this great blog ;-)
Remember dont drink too much wine if you dont want authorities delete it from market :-)