The menu that arrived in the mail was largely unpronounceable but you can’t disqualify a meal just because you can’t quite get your tongue around the names of the dishes. It’s how the dishes actually affect your tongue and taste buds that matters after all. And Indonesian cuisine leaves a lasting and quite fiery impression! 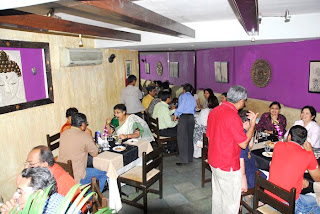 Meeting after a long gap, PGC members drifted into with no great regard to punctuality, which sort of set the mood for a long and leisurely lunch that went way into tea time. Rita Sawhney’s team at had taken on the bulk of the cooking, leaving only a few new members with culinary tasks for the day. The rest had only to settle in at the tables and await a meal that surprisingly didn’t feature a single satay.

Most of us don’t know much about Indonesian food apart from the ubiquitous satay (which incidentally is not exclusively Indonesian) and the Gado Gado and Nasi Goreng that features on the menus of South East Asian eateries. Indonesian cuisine is a mélange of food native to the thousands of islands that form the country, and various foreign influences, ranging from Indian and Middle Eastern to Chinese and European. 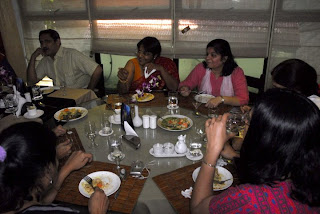 Rice is a staple across , eaten plain (nasi putih) with side dishes, or fried (nasi goreng). Coconut milk finds its way into most dishes including desserts; while peanut sauce is used across the cuisine, either as a dipping sauce or applied to meat or vegetables. is a spice hub and not surprisingly its cuisine is redolent with spices ranging from coriander, pepper, turmeric to cassia, cardamom, and bay leaf. Additional flavour comes from ingredients like tamarind, galangal, lemon grass, dried anchovies, and prawns. Not surprisingly, the cuisine is very distinctively flavoured. With that little tutorial out of the way let’s get on with the meal. For starters we had Ikan Goreng (fried fish in tamarind sauce with dried prawn sambal) and Pergedel Djawa (lamb mince balls with spicy sauce) accompanied by Sula’s Riesling 2008. The gentle wine was a soothing contrast to the burst of flavours that assailed the tongue from the very first bite. We awaited the Paria Isi with some trepidation – the thought of bitter gourd rings stuffed with chicken (or tofu for the vegetarians) didn’t exactly send the taste buds into a clamour – but Cyrus Vaghaiwalla and Vishal Pipraiya needn’t have looked so anxious. The rings were a revelation, the chicken and tofu complementing the not-so-bitter-anymore gourd, and the efforts of the duo were suitably lauded. Meghna Desai served up Mushrooms in a packet, a Madhur Jaffrey recipe adapted from the renowned Indonesian chef Sri Owen. 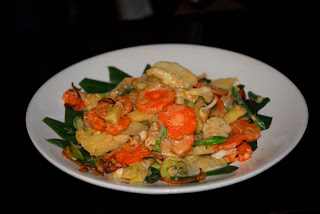 And then there it was – the familiar Gado Gado (vegetables with crunchy peanut sauce), along with Asinan Jakarta (hot, salty, sour and sweet fruit and vegetable salad). At 2.30 pm we were still lingering over the salads and Sula’s Viognier 2008, seemingly in no hurry to reach the main course. Meanwhile Preeti Devnani, whose family has Indonesian connections, was letting us into the secrets of making authentic Nasi Goreng.

“I learnt how to make it from an Indonesian maid,” she assured us, laying the ground for the fried rice with shrimp and chicken that was to follow. Mom Naina was quick to add that her daughter was solely responsible for the huge quantities of Nasi Goreng, a declaration that had Preeti looking a little worried! “I’ve never made it for so many people before!” She was needlessly anxious, since the spicy rice disappeared in a flash, even as Preeti instructed us on how to eat it with the right accompaniments – Ketcap Manis (a sweetish soy based spicy ketchup) drizzled over prawn wafers, and fried onions. 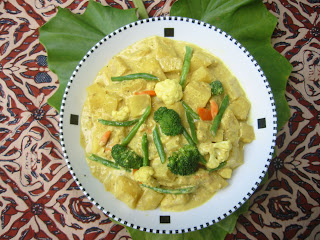 The succulent Balinese Lamb Chops in a mild coconut milk gravy were a welcome respite after the fiery rice. Steamed rice followed with Young Jackfruit Lodeh (Curry) adapted from a recipe of Gary Tyson, chef at the Amandari, and Pindang Sarani or Fish in Turmeric Sauce, both bearing characteristically Oriental flavours. Anita Gosal’s Sala Lobak (cabbage stir fried with red pepper paste) provided some crunch at his stage.

Rohan Mankani was pouring out Reveilo’s Chardonnay 2008 by now and those of us still alert after this monumental meal made sure to get our glasses filled. There’s something to be said for chilled white wine on a hot afternoon, especially after experimenting with a variety of sizzling creations. Dessert was Pisang Goreng (ripe banana slices dipped in rice flour and coconut milk and deep fried) with Shankar’s Coconut Milk Saffron Ice Cream. A great way to cool down before staggering out into the hot afternoon indeed!