After a long hiatus of 5 months, a PGC meet - the first in 2011- was organised on Sunday, March 6, 2011 on the tree shaded lawns of Anu and Kaspar Tideman’s bungalow. 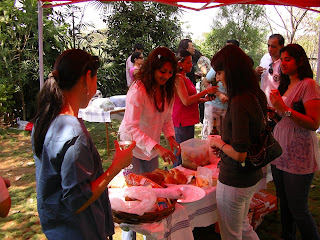 n the shade. The theme was simple - BBQ and wine. Members and guests were told to bring whatever they wanted to barbecue plus one extra portion. Three barbecues were set up, the wines were chilled in tubs and everything was ready to go by 1:30pm. The tables sagged under the weight of a variety of breads, salads, all kinds of meat – chicken, fish and mutton – and vegetables.

It was great t 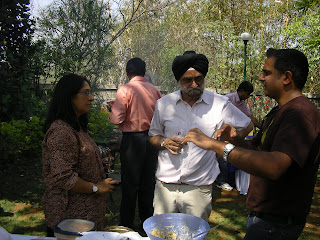 o see members steered clear of Indian marinations. There was no paneer or chicken tikka masala. Instead, we had delicacies like chicken breasts 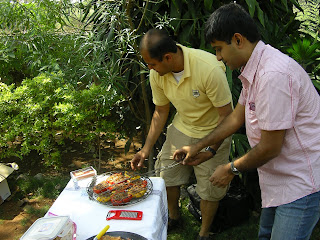 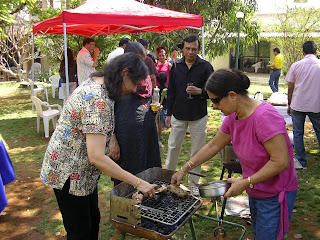 r), chicken breasts stuffed with cheese (Sandeep Chowdhuri & Rohan), mesquite lime chicken fillets (Shankar), Cajun potato wedges (Candy Dugal), fillet of fish (Ponappas) and sausages (Arjun Chowdhry). Ilena and Sangita both did mutton chops -0ne with Cajun spices other with Jamaican jerk seasoning. Rohit Arora was innovative with an apple sauce chicken. Sundar grilled humungous chicken breasts with fresh rosemary. The skin caught fire and some even reached out for a fire extinguisher!! As always members were generous to a fault with the portions. Everyone had brought tons of food and there was plenty to go around. 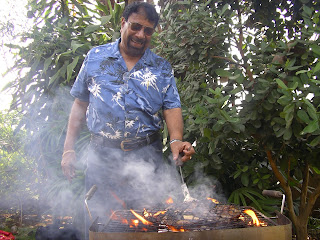 The wines - a mix of reds, rosés and whites - ranged from Chateau d’Ori’s newest Chardonnay to Grover’s Viognier and La Reserve.

This meet was attended by many new members and their enthusiasm was evident. They lent a hand in everything from shopping for wines to organising the barbecue and wrapping up after the event.

2011 augurs well for PGC. The next meet is planned for April.