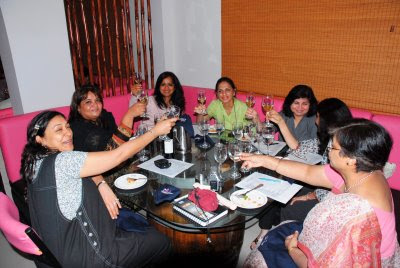 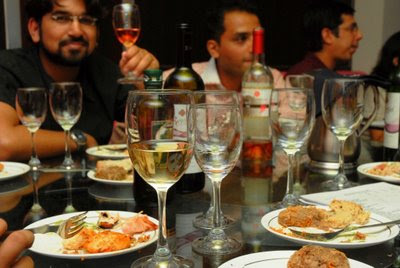 Tapa in Spanish is literally a cover. Tradition has it that in , wine glasses were covered with either a slice of bread or a coaster to keep away flies. Soon enterprising bartenders were topping Tapas with small eats to showcase their chef’s skills. Soon Tapas became synonymous with small snacks or appetisers served in Spanish bars and restaurants as hors-d'oeuvres or cocktail snacks. They are not supposed to be starters, so usually if you begin an evening with tapas, you end with tapas. Which suited us fine, since we could include a wide variety on the menu without worrying about staying hungry at the end of the evening! 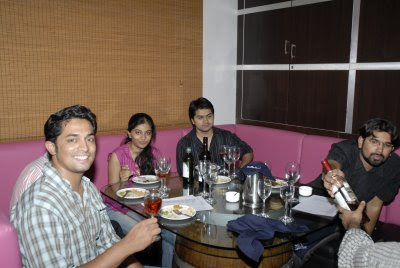 The wines chosen for the evening were all medal winners at the Indian Wine Exposition held in in Dec 2007.

Hunger wasn’t an issue after all. It was more a case of too much! We began with Cherry Tomatoes Stuffed with Spanish Olive Tapenade, painstakingly put together by Sunita andChetan. With the tomatoes we also polished off some homemade bread made by Vandana with Olive and Tomato Pate prepared by Ashvina. A Revielo Chenin Blanc was the first wine of the evening, crisp and refreshing with a delightful bouquet, and fine way to begin what promised to be an enjoyable experience. 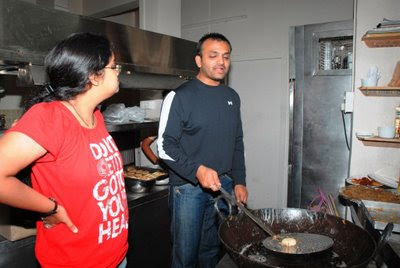 Parag vanished into the kitchen to man the tandoor, presenting with his usual flair a range of delectable kebabs through the evening – Shikhampuri, Chicken Malai, and Gosht Elaichi Pasanda. Vin & Vouloir’s Rose complemented the lamb particularly well. Pyaaz ki Kachori was the vegetarian alternative, and the Indian touch to a predominantly Mediterranean menu was pretty interesting. 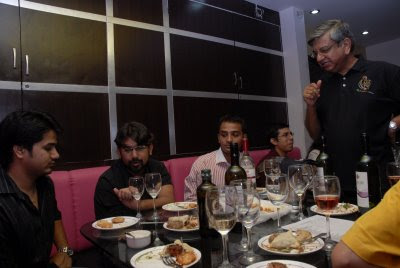 It would be fair to say that the forty-odd people present at the meet didn’t stop eating for more than a few minutes at a time! The Tapas kept coming, keeping Meghna and Vibha on their toes, as they helped the harried waiters with their task. There was Fried Squid with Aioli (Sachi), Paneer Stuffed Patties with Sun Dried Tomatoes (Meghna), Spinach Fatayer (Sheela), Felafel topped with Tahini and Sumak (Shankar), Herbed Tofu Stuffed Mushrooms with Smoked Paprika Aioli (Piyush), Herbed Goat Cheese Shrimp rolled in chicken salami and grilled (Rita), and Pimientos Rellenos –yellow peppers stuffed with rice and chicken/paneer filling (Vinita). It was a wonderful intermingling of flavours and textures. Unfortunately, there wasn’t really enough time between servings to really savour each carefully crafted creation. 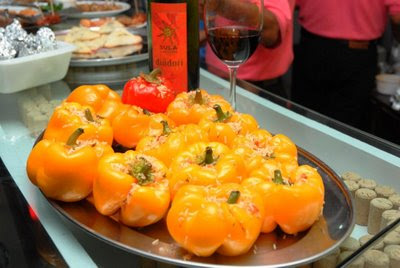 Bottles of Nine Hills Cabernet Sauvignon and Sula Dindori Shiraz were opened as the evening progressed, and most members had to be coaxed into making notations on the rating sheets that were conveniently slipping off the table or getting hidden by the water jugs! Invariably the business end of things tends to be forgotten as members exclaim over the food and sit back and enjoy the wine. Or not, depending on the wine!

The highlight of the evening was most certainly Shankar’s Semifreddo, a delectable concoction of cream, pistachios, Amaretto and home made Amaretti biscuits. Not even the restaurant’s poorly functioning freezer could ruin that masterpiece!